jamesmMember
Found this one that may just do the job:

genenewmanRRTC Chairman
You should refer this to Neville Wood.

Gene
1/7/084:23 AM
❤️ 0
mikesandfordMember
Reminds me of the counter (actually a mileometer reading in miles and tenths) with a 5 point star gear wheel which I had on my first bike in 1951. A small pin fixed on one spoke engaged the gear once per turn of the front wheel.

peteriegelRCMBB Founder
I had one like Mike's at about the same time, but didn't use it much. Loved the way the little star wheel moved when the pin hit it.
1/7/085:42 AM
❤️ 0
mikesandfordMember
I had John Keay's book, The Great Arc, for Christmas. It is about the surveying of India 1803-1850. George Everest had a differential counter built for his perambulator (ie surveyor's wheel). You can see a picture of it, --you probably will need to enter everest into the database search form given by the link. I will try and drop into the museum in Oxford later this week to have a close up look. The caption implies that it counts the wheel rotations giving a resolution of one thousandth of a mile.
1/7/088:31 AM
❤️ 0

peteriegelRCMBB Founder
Hugh Jones put me onto this book a year or two ago. It's very good!
1/7/088:55 AM
❤️ 0
mikesandfordMember
I went to the museum in Oxford yesterday to view mechanism of the measuring wheel or waywiser as they called them in 1833 when it was designed by Everest for use in India. It was hard to photo without flash in a glass cabinet. 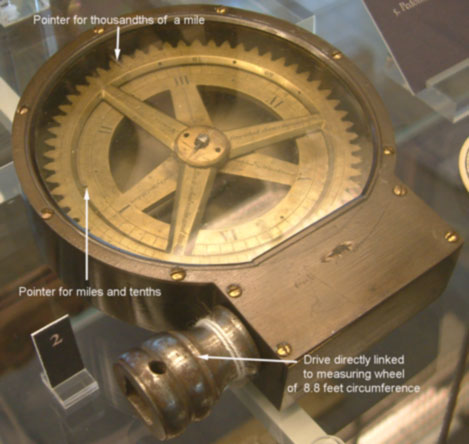 Clever use of a worm driving two gears one with 60 teeth and one with 59, gives a differential rotation of the two plates carrying the scales. Notice that the device could probably be read to about one foot (ie one fifth of the divisions on the thousandths scale). The lower scale rolls over after 6 miles. So it is rather like the Jones counter 140 years later, a little less precise and harder to read, but I am sure it served well during the survey for approximate measurements. The surveyor's wheel to which it was attached would be 8.8 feet in circumference, rather more than our bike wheels today.
1/10/0812:33 PM
❤️ 0

sturiegelMember
I believe the Romans had a horse-drawn gearwheel affair that would drop a small stone at each measured mile. Then a milestone would be installed. The cart was also equipped with a differential. Not bad for 2,000+ years ago.

jaywightCertifier
At the LDS Church History Museum in Salt Lake City they have a covered wagon fitted with a device, apparently designed by Brigham Young, that counts the miles the wagon traveled.

I remember the device used a number of wooden gears that eventually reduced the number of revolutions of one of the wheels to a meter which recorded the distance traveled in miles.